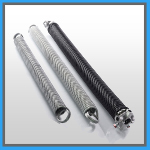 When it comes to opening and closing your garage door, you might be under the incorrect assumption that that bright shiny garage door opener made by one of the major manufacturers are the stars of the show, but they’re really not.  Far from it. They’ll be first to take the credit, but when you look past the obvious, you’ll find out that the garage door springs are the unsung heroes of the whole production. Everything else plays a supporting role.

The springs play such an essential role, and if they walked off the movie set because they weren’t getting top billing, not to mention the TLC that they need to stay in working order, production would be shut down until you did something about it.

One thing to remember is that the springs don’t last forever. They exert a lot of force through being wound and unwound. They’re usually guaranteed for either 10,000 turns or 30,000 turns. At some point they will have be replaced, and your garage door will be down for the count until you do something about it… like letting a garage door professional replace them with Torsion springs.

So what about this rumble: Torsion vs Extension Springs. It’s simple: it’s a battle of old school versus new school. Extension springs would be considered old school; they’re are mounted on both sides and are very hard to balance. There’s also a cable that runs through the center of the spring to ensure that the spring didn’t fly all over the place.

While torsion springs are considered to be a safer bet; they’re still pretty dangerous, and while you might be inclined to want to fix them yourself, DON’T.  Leave it to your garage door professionals to take care of fixing and replacing your garage door springs.